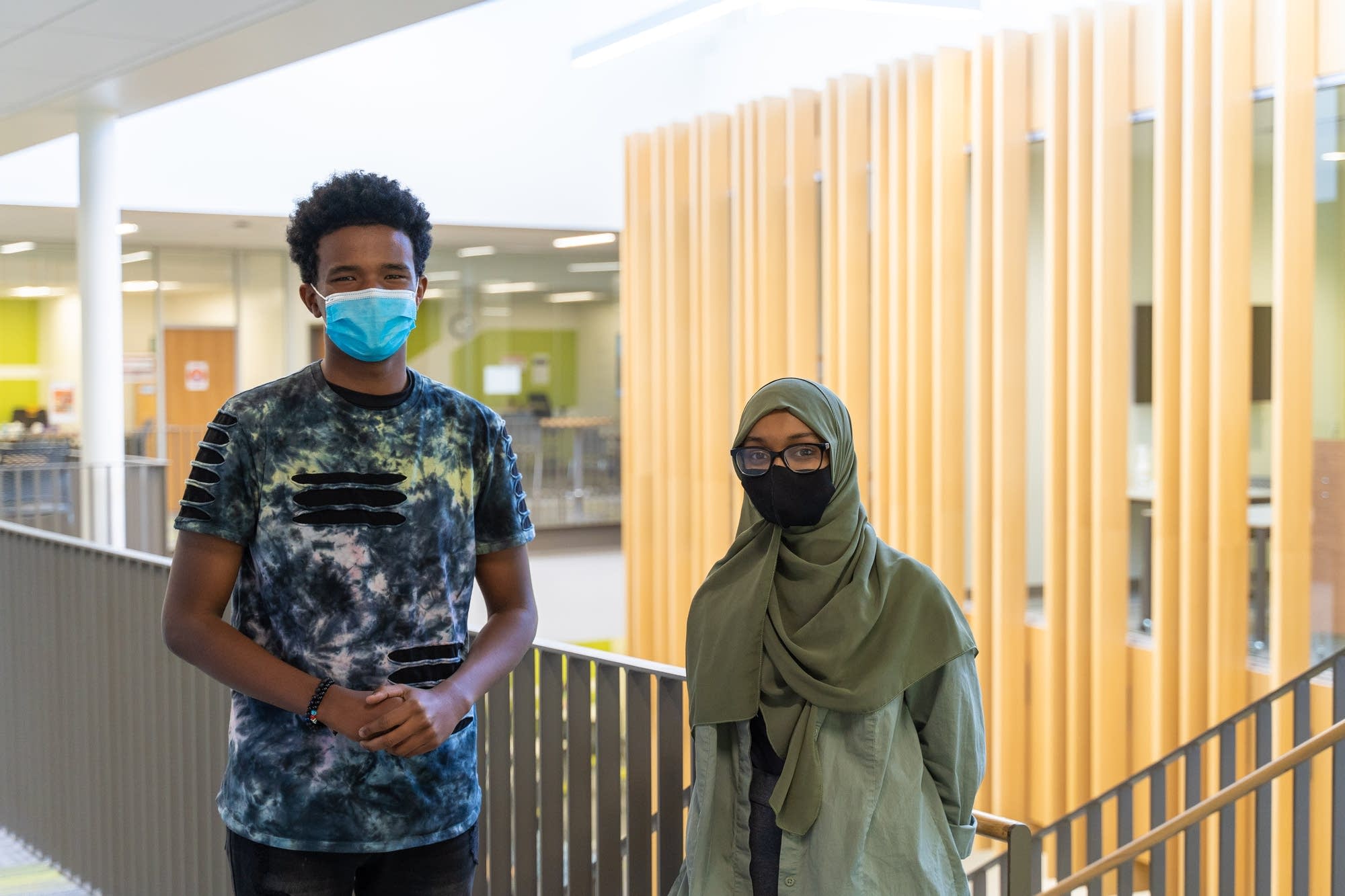 When Munira Ahmed was 3, her family moved from Ethiopia to the Twin Cities, finally settling in St. Cloud.

Her parents spoke Somali at home but didn’t have much time to focus on teaching Ahmed and her siblings about other aspects of their Somali heritage.

“When you come here, your parents — they pay more attention to fitting into the culture, getting a job,” she said. “So we didn’t get to learn more about our culture as much.”

Ahmed, 17, said she can still speak Somali, although not as well as she used to. Her reading and writing skills in her native language are limited.

“My dad had this big book that was just in Somali, and he just read from it,” she said. “Then a couple of times, I just want to read myself. So I learned a little bit from that, but that’s about it.”

Now a senior at Tech High School in St. Cloud, Ahmed is hoping to change that. She’s one of about 40 students in the St. Cloud Area School District taking a yearlong Somali language course for native Somali speakers.

The district started the course last year on a small scale. Interest was so high that they expanded it this year to both Tech and Apollo high schools and North Junior High. District officials believe it’s the first high school course of its kind in Minnesota — and possibly in the nation.

Nearly a quarter of students in St. Cloud schools are multilingual learners, and the majority of those — about three-quarters — speak Somali, according to district figures.

But they might not have had formal education in their native language, especially how to read and write it, said Kelly Frankenfield, director of multilingual learning for the St. Cloud district.

The district already offers several world languages, including immersion programs in Spanish and Mandarin Chinese, Frankenfield said. With the large number of Somali speakers in St. Cloud, it only made sense that it would be the next language the district would add, she said.

“We know that research indicates that multilingual students are more likely to be academically successful in all areas when they have opportunities to continue developing their native language,” Frankenfield said.

Some of the students taking the course have high skill levels of speaking and listening in Somali. But others have had limited or interrupted formal education.

For those students, the goal is to build their literacy skills so they can be successful learning English, math and other subjects, Frankenfield said.

“Once you can read, you know, the sky’s the limit. You’re going to take off a lot quicker,” she said.

He said many Somali families who come to the United States are eager to learn English because it’s important for getting a job and adapting to the community.

But the Somali course gives students a chance to retain their native language and learn about their cultural identity, Mohamud said.

“A lot of them, this is the first time that they’re really digging into their past,” he said.

The language course is an elective, so many of the students who take it are eager to dive into learning more about the Somali language and history. But Mohamud said for others, it takes a while until they really start to get interested in the subject.

“First couple days of classes, they’re like, ‘Why do I have to be here? What’s the point of this? Why am I not learning English more than I am learning Somali?’” he said.

But once they start delving into what it means to have a holistic understanding of their identity, that changes quickly, Mohamud said.

“That’s when I started seeing students who were lagging behind were just kind of sitting upright and paying so much attention,” he said. “As a teacher, that gives you so much energy.”

An immigrant from Somalia himself who came to the U.S. as a teenager, Mohamud said he knows firsthand the importance of understanding and reflecting on one’s roots.

“I think what’s helped me adapt and be able to live and be able to really identify what it means to be a Somali Minnesotan, is the fact that I didn’t lose connection with my past,” he said.

That identity piece was a big reason why junior Ahmed Jama decided to take the class. His family came to St. Cloud from Kenya 10 years ago.

Jama, 17, grew up speaking Somali and can fluently read but not write it. He said his family work at trying to preserve their native language.

“Because we’re speaking so much English outside of the house, one of the biggest rules at our house is if you come in, you’ve got to start speaking in Somali — just so we don’t forget,” he said.

Jama thinks being bilingual and biliterate will help improve his career opportunities after high school. It’s already an asset at his job at Target where he’s often called to interpret for Somali customers.

And he thinks being able to write in Somali is a skill he’ll use frequently — like when texting with his mother.

“Instead of just saying, ‘OK,’ and ‘all right,’ ‘love you too’ and stuff like that — so, write that in Somali sometime,” he said.

Students in grades 10-12 who take the course are able to work toward earning a bilingual seal through the Minnesota Department of Education, which is awarded to students who demonstrate proficiency in a language other than English.

If they can speak, read, write and listen well enough to pass the certificate, gold or platinum level, students can earn credits at the college or university level.

“It really validates the languages that our students bring into the district,” Frankenfield said.

To develop the class, the school district tapped local expertise, including Hudda Ibrahim and Abdi Mahad. They are co-founders of Filsan Talent Partners, a St. Cloud-based consulting firm that helped write the curriculum for the course.

“We had the opportunity to collaborate and help our kids learn and maintain and retain their first language, but also learn English,” said Ibrahim, who’s also an author and educator.

The benefits to being multilingual are plentiful, she said, including greater academic success, more diverse career opportunities and stronger family connections.

Mahad said many parents of Somali American students in the district have reached out to thank them for their work.

“Some of the parents we met believed that the program will eventually promote tolerance, will promote empathy and acceptance of new refugees,” he said.

Starting next fall, district officials plan to offer Somali as a world language to all students, not just native speakers.

They are also exploring the possibility of a dual Somali-English immersion program open to all kindergartners, where students would spend about half the day speaking in each language

Inside Dr Abdiwahab’s 12 day captivity that shocked the nation.

The Las Anod Tragedy: How Somaliland used the horrific expulsion of Koonfur-Galbeed residents as a scapegoat