The Las Anod Tragedy: How Somaliland used the horrific expulsion of Koonfur-Galbeed residents as a scapegoat 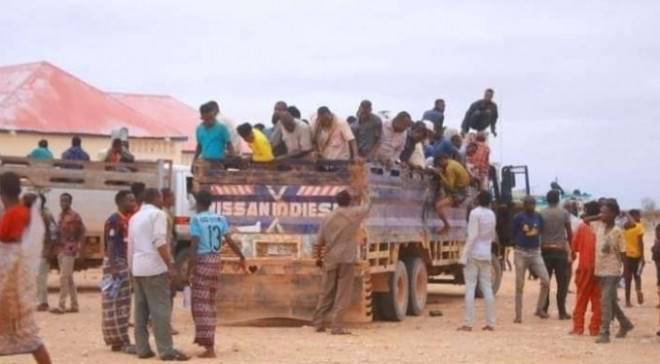 Somaliland authorities operating in the northern city of Las Anod have forcefully evicted more than 700 civilians including women and children, from their homes.

Profiled based on clan affiliation – and on account of their roots in the South-West State in Southern Somalia – they were discriminately rounded up and detained for several hours in a local football ground on the outskirts of the city before being loaded into a convoy of trucks readied to uproot them to the neighbouring state of Puntland.

The residents of Las Anod embraced the South-West community as fellow Somalis who fled the south due to ongoing conflict and needed resettlement from the outset of the Somali civil war. They had since peacefully integrated and established themselves in the city mainly as traders and labours (and in some cases as internally displaced people) living in harmony with the local populace – earning their livelihoods.In this brazen onslaught of expulsion, people were not afforded the due process of law nor provided sufficient time to gather belongings and property or arrange their business dealings before their forthcoming removal, however horrifically contrary to international norms. A sudden storm of troops descended upon them in their homes and places of business and arbitrarily apprehended them in an illegal bid of deportation. In the process, people were separated from family members, including parents who were not allowed to collect their children and were forced to leave them behind.

According to reports, local police, with the support of the ‘Rapid Reaction Unit (RRU)’ – a counterterrorism paramilitary squad – carried out the operation under the orders of Mohamed Kahin, Somaliland’s Minister of the Interior. Kahin recently arrived in Las Anod with a delegation of other ministers. The RRU, which is notorious for unlawful arrests and political intimidation allegations, is said to receive training and funding from the United Kingdom.

Under instructions to fulfill these orders, local officials spoke to the media yesterday. They affirmed Somaliland’s measures to remove all people who hail from southern Somalia from the city for security concerns while vowing to go after the remaining residents who have escaped apprehension and are in hiding.

However, this offensive conduct was Somaliland’s implicit attempt to shift the blame for a string of targeted assassinations attributed to it by city’s residents in a recent public uproar ignited by the latest murder of businessman and city council member, Abdirazaq Ahmed Elmi (Ardofe). Such killings have occurred in the city since 2011, whereby over 80 prominent public figures, including politicians, judges and business people, have been murdered covertly by unknown culprits continuously.

The Somaliland authorities appeared indifferent and persistently evaded answers to account for the assassinations; hence such a complicit attitude aroused public suspicion about the administration’s role in the murders. Last month, the most senior sheikhs and traditional leaders in Sool directly accused Somaliland of involvement in a public meeting. Consequently, they established an ad hoc committee composed of intellectuals and elders to uncover the truth and provide answers to base a decision moving forward.

The forced evictions of the South-West residents manifest Somaliland’s endeavour to exonerate itself from the blame by using this community as a scapegoat and implicating them in the assassinations. This will not mislead or divert the attention of Las Anod residents so easily; it will only stand to inflame the situation further. These security failures and prolonged discontent with Somaliland’s presence in Las Anod could further intensify indignation for the entity. Senior sheikhs and traditional leaders (isimo) have denounced and voiced their dismay about the plight of the South-West community.

It is, however, an immense contradiction, that Somaliland which bases its argument for statehood on ethnic-based atrocities committed by the previous Somali government, is itself targeting specific clans. Beyond the Somali identity and shared cultural values that obligate the protection of kin and foreigners alike, it is undoubtedly unexpected from an aspiring state that ought to respect International Law and hold itself accountable for human rights violations.

Due to its effective control of territory, and as a non-state actor Somaliland is bound by international humanitarian law. It is expected to implement and conform with international human rights and refugee law. The non-refoulment principle is especially a cardinal principle of International Customary Law which Somaliland should observe with the due process of law. Thus, with urgency, Somaliland should stop the collective punishment of this community and listen to the overwhelming calls of condemnation emanating from the region and, in particular, from the residents of Las Anod and their elders, intellectuals and sheikhs.