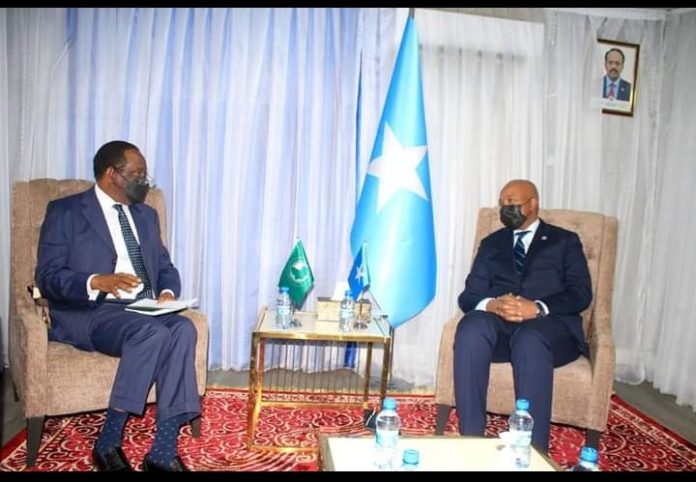 Somali Minister of Foreign Affairs and International Cooperation, Mohamed Abdirizak Mohamud, received in the country’s Foreign Affairs Ministry the Special Representative of the Chairperson of the African Union Commission (SRCC) for Somalia, Ambassador Francisco Caetano Madeira discussing the emergent security issues, the election preparations and process, the winding up mandate of AMISOM and pushing the way for a smooth and soft-landing for much discussed Somali transition plan (STP), which has been hailed as, the only long term sustainable solution for Somalia; to be able to once again stand on its own two feet as she regains her standing in the world’s community of nation. The International Community have spent a great deal of time and resources to help Somalia achieve political stability, security and state-building of stronger institutions in the country.

Sunday’s meeting of the AU envoy and Foreign Minister promised a more balanced focus on the prevailing matters in the country and the urgent need for close cooperation in presenting a unified front to fully back the Somalia Transition Plan by way of improving the framework in raising the level of readiness of Somali military units so that the national army remains the fortress of the nation and its ultimate impenetrable shield.

Mr Abdirizak also in the same day met Ms Martha Pobee, the United Nations Assistant Secretary for Africa, discussing among other things, the importance of lifting the arms embargo placed on Somalia since January 1992 with the adoption of UN Security Council’s resolution 733 and amended in February 2007 to allow arms supplies to the Somali Government Forces. Since then Somalia has been unable to fight back against terrorism effectively being equally if not less armed against the insurgents.

The last 5 years have seen a paradigm shift in the quality and capability levels of the Somali National Army which now frees large swaths of territory from Al-Shabab and keeps it secured. The Somali Transition Plan pushes for Somali take over of the security sector as well as ensure low levels of dependency on literally keeping the peace in Somalia.

To contribute to or get featured on the Daily Jubba, email us on [email protected]

Beijing, Moscow, Ankara Push US Out Of Red Sea Dominance

SAHAN’s failed machinations of “Research” and “Consultancy” across the horn.