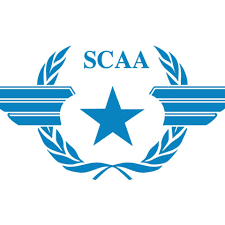 The Director General of Somali Civil Aviation Authority, Ahmed Moalim Hassan set the record straight after reports emerged of discreet negotiations on-going between the authority  & Vector Airways Systems. Vector Systems is a private US-based company and because Somalia could not implement ICAO safety concerns, the country could lose air space control. He has since disproved the rumours and further pointed out that there was no deal but rather a 2019 pitched proposal between the private Virginia based Vector Airways Systems and Somali Ministry of Transportation and Civil Aviation, represented by the Somali Civil Aviation Authority.

Speaking alongside the Minister for Transportation and Civil Aviation Mr Duran Farah on Glosoya forum (Global Somali Youth Alliance), Moalim also shared further little known details on Somali Aviation’s rebirth after the country got back its airspace control in 2018 after 27 years of being managed from Nairobi in nearby Kenya.

Among the lesser known details of his address were:

Starting the Civil Aviation Authority from no pre-existing structure in 2018 meant buying the latest equipment, systems and state of the art operating techniques; this has led to the authority getting a cutting edge grasp on civil aviation making it at par with India on airspace border control.

There are now less accidents occurring in Somali airports than any other neighbouring country in the region. Accidents recorded are indicators of a country’s aviation safety record. Since Somalia took over its airspace, daily flights rose from 200 to 400. Currently $22m per year is made roughly, this will rise to $45m

The airports of Bosaaso, Baydhabo and Mogadishu will now be all interconnected with a single feed using satellite technology. This will eventually allow full control of the airspace management.

Transition of the Airspace classification was Class G at the start and is now expected to be the apex Class A with high surety rate to happen by June/July 2022. Currently every flight that uses the Somalia Airspace pays $275. This will be raised to $400 as soon as Class A transition is done

The authority will renegotiate with Favori LLC ( the Turkish company that manages Aden Adde International Airport) so as to make local domestic flights cheaper than the current rates to and from the capital.

The much talked about reestablishment of the national carrier Somali Airlines which was also underway and negotiations are ongoing with a Brazilian manufacturer. The next government will have to factor in this on their budget and seek funding for this grand project.

Both the Civil Authority and ICAO have mutually agreed on a new viable location to build a replacement international airport to replace Aden Adde International Airport. This most floated around location currently is Warsheikh, which is a picturesque prime location.

TPLF seeks Muslim sympathy; no surprise none is forthcoming!