TPLF seeks Muslim sympathy; no surprise none is forthcoming! 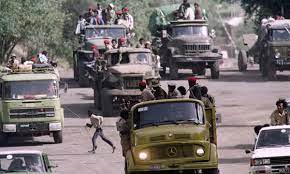 As reported by the AFP last week, the TPLF pushed propaganda tapping into the historical past of Islam in the Tigray region. In their reporting- about the TPLF’s outreach pitch to Muslims (who they deem to support the Ethiopian government) mainly the UAE, Iran and Turkey, they went short of mentioning the TPLF’s past dealings with Muslims at the helm of their power—it was far from ideal!  The outlawed group is now trying to garner the world’s attention to the significance of the Tigray region and the legacy of the famously just Abyssinian King Nejashi who offered the early Muslims refuge in his kingdom, as the region was the site of the first followers of the Prophet Muhammad (pbuh) called Muslims immigrated to while fleeing persecution by the pagan Arabs in Arabia to the north coast of East Africa. The Somali coast, Ethiopian northern highlands which now constitute parts of Tigray and the State of Eritrea hosted the destitute abandoned Muslims who crossed the Red Sea offering them amnesty, safety and the sacred right to religious freedom. The region spots famous mosques built in the 7th century, chiefly the Nejashi mosque whose unfortunate bombing which by the law, is unclear who is behind, has been effectively the TPLF talking point who used it as a rallying cry to incense Muslims all over and seek their sympathy for their seemingly fledgling cause. This is insincere and manipulative since the TPLF actually has a track record of targeting Muslims and mosques.

Few Muslims from Somalia, Ethiopia, Eritrea and the wider Horn Of Africa will be fooled by this!

For starters there are actual Muslims who are ethnic Tigrays who live among their brethren in the Tigray region, in the TPLF led Ethiopia these minority section of society were not saved from anti-muslim rhetoric which was a state policy for 27 years. Their ethnicity and closeness to power did not stop their suffering; they could not build any mosque in parts of Tigray especially in the city of Axum. Under TPLF, Muslims in Tigray are not allowed to have a burial place in Axum too. They have to take their loved one body 30 miles out of Axum in order to bury him/her. Talk about Muslim sympathy with such a track record!

In the TPLF-led war with Eritrea and the subsequent occupation of Eritrean land, they did not exhibit affection for the country with a considerable number of Muslim populations if that is any indicator of their professed “respect” for Islam and Muslims!

Just months ago, after the epic failure in their quest to march to the capital, retreating TPLF militia men burnt copies of the Holy Quran in Afar (a region who are all practically muslims) , massacring Amhara Madrassa students while destroying their mosques. The Secretary General of the Amhara Region Islamic Affairs Supreme Council is record addressing this wanton disregard for sanctity of human life and property.

Somalis are one of the most Muslim people on earth with a record 99.80% of them being of the Sunni Muslim persuasion, if the TPLF valued Islam and Muslims surely their relations with Somalis who housed, armed and financed the TPLF’s long quest to power would be reciprocal and give special consideration to their beloved Muslim neighbours buy nay!

According to a 2007 Human Rights Watch;

“Tens of thousands of ethnic Somalli civilians living in eastern Ethiopia’s Somali Regional State are experiencing serious abuses and a looming humanitarian crisis in the context of little known conflict between Ethiopian government and a poor defenseless Somali population…. conflict has been simmering for years with intermittent allegations of abuses, it took on dramatic new momentum after the Ogaden National Liberation Front (ONLF) attacked a Chinese-run oil installation in Somali Region in April 2007, killing more than 70 Chinese and Ethiopian civilians. The Ethiopian People’s Revolutionary Democratic Front (EPRDF) government, led by Prime Minister Meles Zenawi, responded by launching a brutal counter-insurgency campaign in the five zones of Somali Region primarily affected by the conflict: Fiiq,Korahe, Gode, Wardheer, and Dhagahbur. In these zones the TPLF led and commandeered columns of ENDF have deliberately and repeatedly attacked civilian population in an effort to “root out” the insurgency.

The TPLF commandeered troops have forcibly displaced entire rural communities, ordering villagers to leave their homes within a few days or witness their houses being burnt down and their possessions destroyed-and risk death. Over the past year, Human Rights Watch has documented the execution of more than 150 individuals, many of them in demonstration killings, with Ethiopian soldiers singling out relatives of suspected ONLF members, or making apparently arbitrary judgments that individuals complaining to soldiers or resisting their orders are ONLF supporters. These executions have sometimes involved strangulation, after which their bodies are left lying in the open as a warning, for villagers to bury. The information confirmed by Human Rights Watch is only a glimpse of what is taking place-real figures is likely to be higher.

As if that was not enough Somalis in Somalia proper were not spared by the “Muslim respecting TPLF” tapped General Gabre and Seyoum Mesfin (longtime Foreign Ethiopian Minister) both  card carrying members of TPLF and close confidants of Prime Minister Meles Zenawi oversaw the slaughter of a conservative estimate of 60,000 defenseless men, women and children in Mogadishu all under the guise of fighting terrorists, terrorists who would not come to place if the moderates that constituted a relatively safer administration were not uprooted by the American sponsored Ethiopian invasion of Somalia.

During the US-backed Ethiopian invasion of Somalia, General Gabre and his forces resorted to using white phosphorus bombs, a new brutal phenomenon never seen in Africa and flagrant disregard for international law, in the aftermath of the  bombs 35 civilians were killed. Many were cut down by passing motorcades machine gun fire, indiscriminate mortars and shelling of entire neighborhoods. Words cannot describe the brutal realities in Somalia’s 2006-2009 and the subsequent meddling in the internal affairs that ensured up until 2017. The TPLF raised the Ethiopian flag in Somalia’s State House, imposed ethnic federalism (like they did to Ethiopia) trough a bogus unilateral provisional constitution and subdivided Somalia into 5 different regions, each with its flag and reporting back to TPLF handlers who will then report back to base.  No Somali has fond memories of those times! TPLF should stop trying to toy with Muslim emotions and find another way to seek sympathy for their wicked & pointless rebellious stance and stop their inconsolable emotional rants. Crocodile tears!

Somalia’s woes under regional and international tutelage disguised as “help”