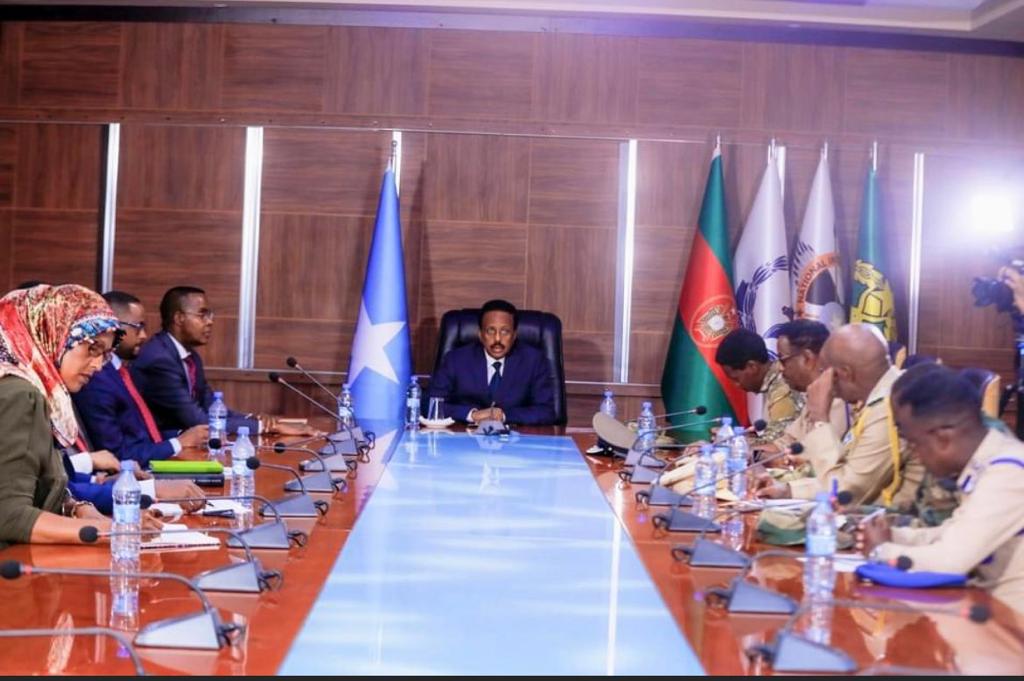 CONTINUITY OF GOVERNANCE IS THE ANSWER TO SOMALIA’S PROBLEMS;

In recent history Somalia has been plagued by unnecessary interruption of progress hence obstructing stability and continuity of governance. Starting from the year 2000 there is a worrying trend where Presidents who served between the years 2000 and 2016 were rudely interrupted before they could really lay down the foundational structures of government. All these heads of states; H.E. President Abdiqasim Salad Hassan; H.E. President Abdullahi Yusuf Ahmed; H.E. President Sheikh Sharif Sh. Ahmed; and H.E. President Hassan Sh. Mohamud were denied the chance to continue. Political stability can achieved by administration that extends beyond one term or presidency.

The Incumbent President H.E. Farmaajo – February, 2017, immediately Farmajo took office he embarked on a journey to revive Somalia’s institutions with security being the top priority. Every security expert would agree with the fact that Somalia can only attain true stability when its own national forces take full responsibility for the security of their country because ownership and sacrifice are the key ingredients to achieving any lasting peace.

With only three months in office President Farmajo convinced the heads of Somalia’s regional administrations and Benadir regional administration to agree to Security Architecture. Exactly a month later the President laid out his security plans at the London Conference in May of 2017. This was followed by the December 4th 2017 Security Conference that was convened in the capital Mogadishu. All this led to the first Somalia Security Transition Plan known as STP was officially signed on the 31st December 2017. Under this Plan foreign troops that make up Amisom would start their phased withdrawal gradually transferring security responsibilities to the Somali National Forces. The STP was to be concluded by December 2021. With a few months extension, Amisom mandate is now approaching its final exit date which is on 31st March 2022.

Starting from 1st April 2022, a transition force known as ATMIS will replace Amisom. The new mission is mandated to transfer the remaining security responsibilities to our own Somali National Armed Forces in the period between April 2022- April 2024. This period is very crucial to our national security.

The incumbent president who negotiated these agreements, and followed them with unwavering commitment to realizing a Somali-owned and Somali-governed security must be allowed to see through. The only way to safeguard this hard-earned progress is by renewing President Farmaajo’s mandate to serve as Head of State.

President Farmajo is ONE-STEP away from realizing the Security goal for Somalia.

Reliability and consistency in paying salaries throughout his first term. Even when the four-year that was budgeted for ended, the President did not whine or complain, instead he took responsibility to lead the country and ensured his administration continues to pay all government workers without a delay.

President’s Farmajo’s commitment to reforms in our financial management system earned our country the trust of international financial institutions. As a result our country was able to reach the HIPC decision point in March of 2020 and hopefully we expect to reach completion point which will mean complete Debt Relief for our country.

Let’s borrow a leaf from afar, from early 1970s to about 1990s, elections to the U.S. House of Representatives had a trend where 90% of incumbent senators sought re-election and more than 90 percent of those senators would win. That continuity made those decades the period of time in which the most consequential legislations were produced by the House. In connection to the above is that these three US Presidents (Bill Clinton, Bush 43, and Barack Obama) served two terms each. Presidential historians agree that re-electing an incumbent President brings comparable advantages over a newcomer.

One way in which African Countries are derailed by Western powers is to peddle the notion that “transfer of power” is itself an achievement and a measure of “democracy”. The illusion that the way a leader arrives in office or the manner in which he leaves is more important than what he does while in office or neglecting on-going reforms is dangerous and must be rejected. Democracy to us means being able to restore rule of law, feed our poorest, fight hunger, protect our vulnerable populations, and secure our borders.

Introduction of virtues such as integrity into our national politics

President Farmajo – as one of his fiercest critics admitted – schooled everyone of Somali politicians in four years. In the words of Professor Patrick Lumumba, President Farmajo does a lot and spends little time to talk about. He embodies responsible leadership, discipline and seeks mandate from the Somali people and he is personally incorruptible and honest.

President Farmajo consistently strived against foreign interference into the internal affairs of the Republic of Somalia. H.E. Farmajo finds in him the courage to decisively tell aggressors (nearby and/or from afar) to respect the sovereignty, territorial integrity and political independence in the most diplomatic way. When faced with major challenges, he doesn’t cower or complain, instead he maintains his cool and leads.

Bottom-line is, President Farmajo earned re-election because his credibility is unmatched. He enjoys wide public trust & support hence all-time favorite of the common citizen of Somalia. His leadership ability to navigate major challenges including security, economic and political challenges is being proven to be effective. The continuity of Farmajo’s presidential leadership is paramount to the recovery of the Republic of Somalia.

In addition, thanks to the steady Leadership of President Farmajo every MP and Senator earned their salaries and allowances throughout their period of service.

A president who is genuinely trying to solve pressing problems facing our nation. If re-elected he will continue to serve diligently to solve more problems.

Our view is that Continuity is the missing ingredient to achieving lasting peace, stability and good governance in our country Somalia. It is about time to break this cycle of unnecessary interruption of progress. The three-hundred and twenty-nine (329) Members of the 11th Parliament will be remembered for their heroic decision to re-elect President Farmajo into second term in office because it is in the best interest of the Somali nation that President Farmajo is re-elected to a second term in office so that he can complete the recovery process that he initiated.

The writer Saadiq Hurre, is a Somali youth leadership advocate with particular focus on human capital development. He writes on Somali & wider Pan-African issues. Find him on twitter https://twitter.com/SaadickH

Views expressed in this article or any of our other articles do not necessarily reflect the views held by our staff or our outlet.

Can Think Tanks, Lobbyists or Senators offer Recognition to Separatists?

What is the Somali Nationhood Agenda?