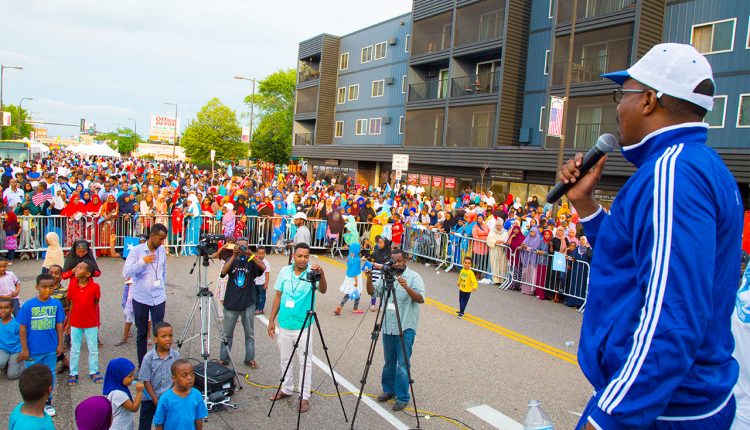 I visited Minneapolis the first week of July 2022 to witness the annual Somali Independence celebrations organized by the Somalis in Minneapolis. In my week-long stay there, I had the opportunity to explore the city, especially the areas in which Somalis live.

I went to the Somali malls, dined at restaurants and toured the museum that curates Somali artifacts, as well as relaxed and enjoyed Somali tea in cafes. I joined the parade, commemorating the 62nd anniversary of Somalia’s independence. Big crowds of Somalis and other members of the general public thronged and filled in a km long stretch of main highway closed off for the event. A big stage, sponsored by Amazon and other big names in the area, was beautifully erected and decorated. DJs and singers were on stage, singing Somali songs honoring old freedom fighters and appreciating their heroism and sacrifices. Attendees’ enthusiasm and participation were great and obvious. They were highly spirited, waving Somali flags and singing along with the singers on stage. Everyone was in a festive mood. Apart from the singers, other groups draped in traditional Somali attire were also there to entertain and thrill the crowd. They were performing dhaanto and other Somali folklore dances. They were dancing beautifully with nimble foot movements. Their brilliant wiggle and wriggle sent the crowd into frenzy who responded to them by cheering and whistling.

Horses and other domestic animals were also brought by ranchers and other animal-keepers in the area for amusement and entertainment of the event-goers, especially children, and of course for the owners to earn some income. Children were put on horsebacks to experience and enjoy a rare horse ride. They seemed to be happy and joyful. They were also given the opportunity to get close to goats, sheep and rabbits in a petting zoo. Parents and guardians seemed to be relishing the plenty of activities and choices that their children had to choose from. They were closely monitoring, interacting and encouraging their children to sing patriotic Somali songs and to imitate folklore dancers’ movements. It was a fun-filled event that made both adults and children thrilled and enraptured.

The presence of two dozen police officers on the event grounds also stood out to me and it is worth mentioning that they were Somali-Americans entirely. The youthful officers were keeping the order in an efficient and professional manner. They were friendly, attentive, and interacting with the public. They were greeting the public and allowing anyone interested in photographing with them. It was a pleasant sight and something to be proud of. While there, I felt to be a part of something big and worthy.

The community, the biggest of Somali communities settled in the United States after the collapse of their state in the 1990s, is estimated to be 1 percent of a city of over 4m souls. According to SCtimes.com, Somalis in Minneapolis number between 42400 to 55200. Majority of the Somalis live in Cedar Riverside, Phillips and Elliot Park neighborhoods of the City. Somali businesses, mosques and schools are concentrated in these areas. Some schools in the area are run by Somalis. Students in these schools are exclusively of Somali heritage and if there are some from other communities, their numbers are insignificant. Some sources indicate that about 4000 Somali children are in the public school system in Minneapolis. It is also estimated that about 300 students are studying in various post-secondary institutions in the area. With all these youth at different levels of learning and many more expected to enter into the system on an annual basis, Somalis in Minneapolis will be a force to reckon with. They will be a productive, respected and prosperous community that contributes to the US society immensely.

Although Somalis are late comers, they are already making noticeable gains in business, politics, as well as professional practices. There are a few malls owned and operated by Somalis. All the businesses in these malls are family-owned small businesses that rely on the patronage of the Somalis in the area. They sell merchandise that is suitable for the lifestyle and needs of the community members. Women’s modest outfits as well as robes and other items worn by Somali men are conspicuously displayed in all stores. The human traffic, arriving cargoes and transactions taking place suggest that the businesses are doing fine. A few store owners I talked to while there told me that their businesses perform well and make a good margin of profit. There are restaurants and cafes throughout the Somali neighborhoods. These establishments seemed to be attracting a fair amount of patrons both Somalis and members of the general public. Cafe and restaurant owners I chatted with expressed optimism and hopefulness of their businesses.

In the political arenas, the community is represented but not as sufficiently as it should be. Somalis started seeking public offices not that long ago but it is encouraging to see community members elected into federal, the state legislature, city council and school boards. Fiery congresswoman, Ilhan Omar is the only Somali politician in congress now. There is growing community awareness that there is a need to participate in election races for different levels of government. As a result, there are more aspirants in every election which shows that Somalis are eager to become an integral part of their state and country. The community has also produced fine professionals who work in the public sector or have their own private practices. There are lawyers, medical doctors, dentists and social workers who are proudly serving their community as well as other Americans. More people are regularly joining the existing practices or opening new ones. This upward trend and growth of Somali professional practices are sources of inspiration, pride, wealth creation, and intellectual achievements. Taking all these things into account, it is undeniable that this community will be an inviolable force in its new homeland.

Most of the progresses made so far are realized by individuals determined to better their lives. There are no major community-driven initiatives that have produced enduring, tangible and fruitful results. Collectively created and owned programs and mechanisms designed for self-governing are limited and inadequate. So, there is a need for the whole community to come together and unite for their common interests. In order to prosper, preserve identity and cultural heritage as well as remain distinct while striving for being an integral part of the broader society, it is imperative for the community members to be tight-knit united and pull in the same direction. Unity and working together are only options that will enable this community to leave a legacy that will benefit generations to come for a long time. The community needs to craft strategies designed to achieve sustainability and endurance. The old guard has to get out of the way and allow the energetic, educated, young people to take the reins and run the community affairs. They understand the political, economic, and cultural dynamics of the country more than the elders who are the gatekeepers now. The young people can work together perfectly, get along with each other, and achieve a lot for their community.

It is crucial to have strong organizations serving the community as efficiently and transparently as possible to foster necessary unity and gain strength. Such organizations can concern themselves with different needs and services essential for the wellbeing of the community. Wide and diversified initiatives in education, healthcare, youth mentorship, cultural preservation and community cohesion should be prioritized and maintained. While focusing on different areas, they can work together and also collaborate with government agencies as well as other community-oriented bodies in their area. Youth mentorship is also vital for the community to function and stay alive. Sports, volunteering and various other activities designed for the youth to participate in strengthening the community should be in place. They should know each other, work and grow together. Such initiatives and programs are essential to prepare the youth for cooperation, marriage, recognition and preservation of their common heritage and identity

The community also needs to maintain connection with its roots and home country to keep alive its heritage and identity. Speaking Somali at home, watching and listening to TV and media content presented in Somali is also beneficial. Visits to Somalia individually and in groups are also encouraged to deepen and strengthen the connection and bond that hold together the diaspora and their homeland. Business connections between the diaspora and their home country should also be encouraged. Goods imported from Somalia with the Somali flag and other significant national symbols on them will be sources of pride and happiness for the children of the Somalis in the diaspora. Sense of belonging will be created, not to mention the badly needed cash injected into Somalia’s economy. The fish exports will be readily and profitably sold in the diaspora.

Strong, coherent community voice will not only move the community forward but also combat and eliminate unethical practices by some community members. A case in point is the recent scandal that engulfed the whole community. A program called Feed Our Future financed by the Federal Government hired Somali businesses to ensure the needy and vulnerable in the community were fed and looked after during COVID-19 pandemic. Unfortunately, the funds were mismanaged and stolen. None or little reached the beneficiaries. Similarly, there are also infightings and disagreements over mosque funds. Things sometimes get out of hand. As a result, some people get physically harmed, others get landed in prison and relationships are severed. An imam of a main mosque in the area was physically assaulted two weeks ago due to disagreement over mosque resources. He was stabbed a number of times and ended up in a hospital bed. All these incidents are clear evidence that it is inevitable for the community members to come together for the greater good to eliminate bad practices and venal behavior.

This community will achieve monumental successes in many areas with efforts and unity. I hope the community members will come together and double their efforts to leave a strong and lasting legacy.

You can also feature your writings on The Daily Jubba if you meet the submission requirements on https://bit.ly/3SlMYfz by sending an email to [email protected]

The legality of secessionism in Somalia