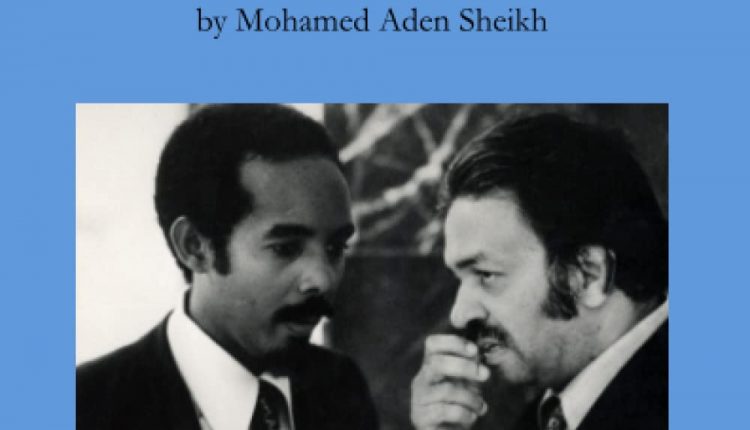 Mohamed Aden Sheikh was a surgeon by profession and educated in Italy. He served for a long time as Minister of Health and later, for a brief stint as Minister of culture and information for Somalia’s Military regime . He was a reformist and modernist who always wanted to transform Somalia into a modern country along Socialist lines, but his good intentions were up to no avail for he was put in jail for 6 years. His memoir “Back to Mogadishu” chronologies his life and ambitions in Somalia, which ended in catastrophe and tragedy of epic proportions.

He was a leftist ideologue and interlocutor of the military and the civilian secretaries. He was influenced by leftist thought while studying in Italy; since their ideals of social justice and freedom for all resonated well with him, and they also supported the rights of the colonized people to self-determination. “The fact that I was an African whose ideal was the liberation of Somalia and the decolonization of the entire continent meant that I almost automatically saw eye to eye with the culture of the left,” he notes.

He got in trouble with right-wing groups while touring Italy to educate them on the negative impact of colonialism, especially the Italians, on the colonized people. The right-wingers reported him for “offending the national pride” and “defamation of the Italian state.” He was put on trial and vindicated by the court for not committing acts that may constitute a crime.

Contrary to popular belief, Mohamed argues that there was “no international plot behind the coup,” and the Military was planning to stage the coup in January but postponed it when the news was leaked. Siad Barre wanted to act, Mohamed states, since Egal wanted him ( Siad Barre) removed from his job, send him abroad and appoint in his power position, a northerner by the name Ainanshe Guled.

Mohamed also mentions that General Aidid was nominated to “liaison between the Military and young technocrats who were asked to draft a rough development project for Somalia. “The technocrats from different backgrounds (doctors, engineers, agronomists, economists, and jurists) teamed up. According to Aden, they presented a project that was instrumental to the achievements of the regime’s early years. He claims they suggested socialistic choices even though they didn’t openly use the term “Socialism.”

Mohamed Aden Sheikh was an idealist who believed western domination was the reason for the backwardness and that socialism was the only path to rapid social and economic development. He notes that for the civilian and military to work in tandem, was a rarity in third-world countries.

Nine civil secretaries agreed to work with the military, and their role was merely “technical and administrative,” and their plans were contingent upon the militarymen’s approval. The military retained all legislative power, and the civilians were always made cognizant of their preeminence since they were instigators of the coup. Mohamed thought it was in the country’s best interest if power was concentrated in a few “safe hands.” In the process, he admits, they aided and abetted Siad Barre to become the absolute dictator who, with his unfettered power which later led to the country’s demise.

He was of the opinion that continuity and political stability were paramount to reform, thus, any other countercoups must be avoided at any cost.

In 1973, Mohamed reminds us that he and his friend Weyrah, the Minister of Finance at the time, informed the president of the need for a constitution, a parliament, and a political party. He intimates that their relationship with the military deteriorated adversely when Somalia formally joined the Arab league. He argues the decision was shrouded in secrecy, and the military did not consult with them; thus, he tendered his resignation. He contends Somalia would be better served as an ally as in an observer state, not as a full member of a League who was characterized by constant division and endless bickering among themselves.

Mohamed Aden also argues, quite strangely, that the civilians did not know until 1973 of the effects of the draconian laws enacted by the military leadership and that a lot of people were suffering dreadfully in prisons since they were distracted to “improve the life of the entire population.” However, he acknowledges that they didn’t prioritize freedom and individual rights either.

Mohamed continued to infuriate the strongman by constantly demanding reform on many occasions. He always believed there was room for reform. When the party was established in 1976, he expected, as promised, the legislative and presidential elections would take place, but nothing changed, and the regime became more ruthless and brutal. Several times he tendered his resignation to Siad Barre, as he claims, and requested never to be re-appointed, and if they did, he would resign publicly. He lost his ministry position in a cabinet reshuffle in 1982 but retained in his parliamentary spot and the party. He drew up an institutional reform plans with his group of reformers, Gacaliye, Ali Khalif, Warsame Juquf, Dhigic Dhigic, and Ahmed Ashkir Botan. They suggested, among other things, a program to deal with the economic crisis, redefine foreign policy, and create a prime ministerial position. Siad Barre rejected their proposal out rightly with no deliberation. He personally met with Siad Barre a few days before he was arrested and told him the country needed “drastic reforms” Still, Siad was infuriated by Mohamed’s insistence and stubbornness to the point of accusing him of “spreading poisonous thought” and encouraging the young Somali intellectuals to become “disenchanted with the regime.”

Mohamed’s reformist friends fled the country one by one, but he decided, as he narrates to stay in the country, to confront the dictator and take the ultimate risk. Perhaps, he was thinking he would not be arrested since he was of the same clans as the President Siad Barre, supreme leader of the military establishment. He was arrested along with a leading national leader Omar Haji Masale while visiting Baidoa. Ismail Ali Abokar, Omar Arte, and Osman Jeelle who were also leading figures of the administration were arrested in Mogadishu. Mohamed claims he always thought the stories about special holding prisons were made up fairy “propaganda against the regime” until he was locked in one for a good 6 years, it was the Labaatan Jirow Maximum Prison–one of many infamous prisons. He felt betrayed by the government he served for 12 years and was jailed for no apparent reason nor a charge presented to him! He was in solitary confinement, anguishing for 6 years, and was even refused books let alone seeing his family. He was released after a show trial but was put under house arrest until October 1988.

Mohamed always had ambition and believed there was an opportunity to transform Somalia into a modern state. With the birth of one-party system, he thought they could fight within the party and push his reformist agenda within, but their plans and ambitions were foiled and squandered by a myopic military.

He fled to Italy in 1989 after observing the country he was working on his transformation was turned beyond redemption.

The memoir Back to Mogadishu has been translated into Somali by a young progressive leftist, Abdiaziz Aw-Guudcadde, who also translated Fanon’s Wretched of the Earth and Freire’s Pedagogy of the Oppressed. Hiil Press will publish the book and it is to come out in 2023.

It’s a memoir of an idealist whose grand ideas and dreams to modernize his country ended in disappointment and failure.

It’s a good read for the young generation interested in their modern history recorded by one of the actors who witnessed the evil of colonization, the birth of nationalism, and the struggle for independence, parliamentary democracy, military dictatorship and civil war.

You can contact the writer Abdirahman Issa by email [email protected]