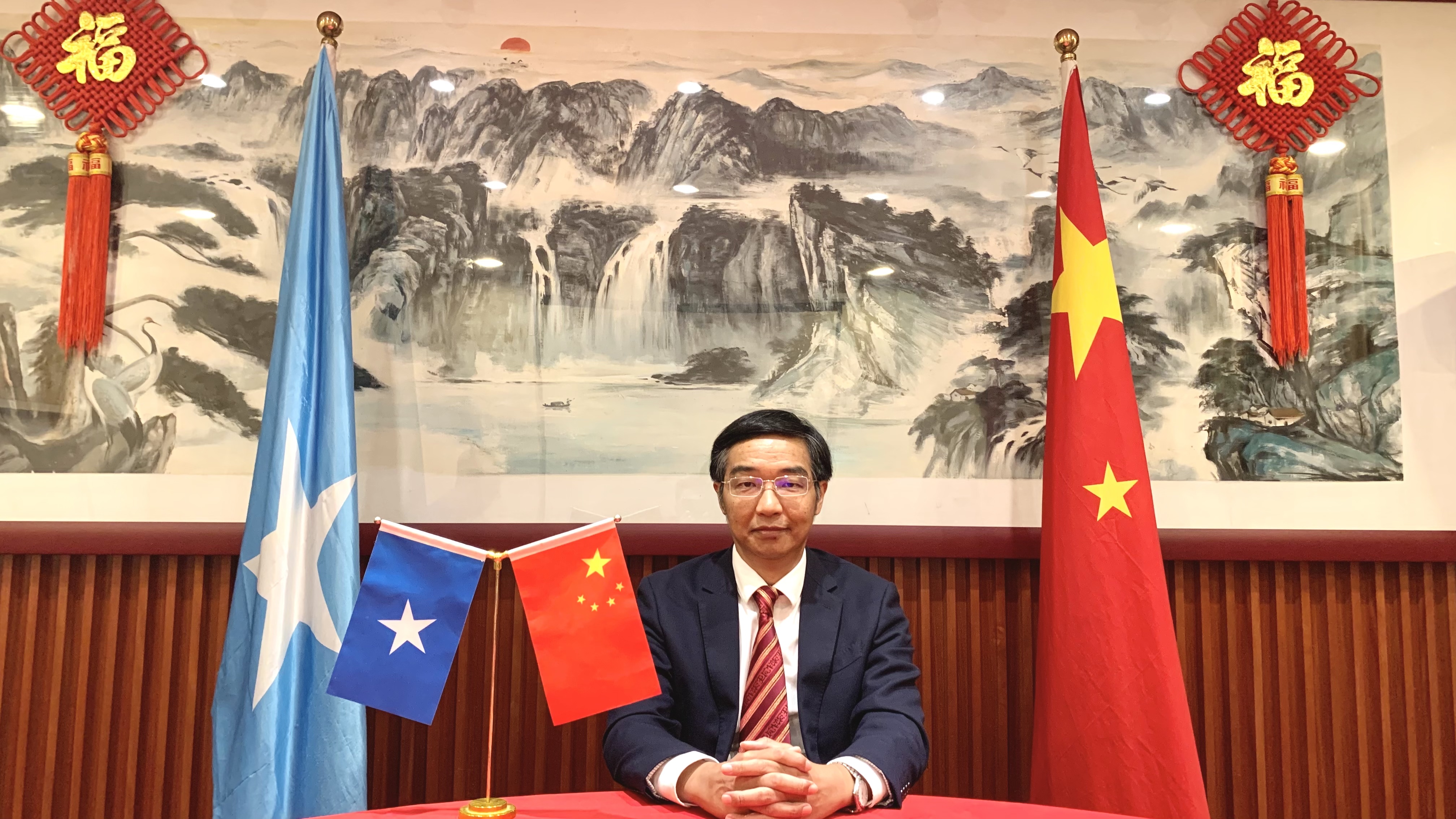 The Daily Jubba’s Mustafa Ashaari attended the Online Reception of the Chinese Embassy in Mogadishu on the 73rd National Day of the People’s Republic of China (PRC) and wrote this report about it.

The Daily Jubba was graciously invited to the 73rd national day of the People’s Republic of China hosted by, the Chinese embassy in Mogadishu showcasing the momentous feat of historical accomplishments by the second largest economy in the world.

The event was started off by the Chinese and Somali national anthems which set the scene for the comradely nature between the two nations, prime minister, Hamza Abdi, Barre also joined via video transmission with congratulatory message for the People’s Republic on 73rd anniversary, the prime minister noted the historic bilateral ties that span centuries between China and Somalia, ending his kind words with a greeting in the Chinese language.

The prime minister Barre was followed by ambassador Fei Shengchao who talked about the nature of this historic day and what it meant to Chinese people the ambassador mentioned the founding of the People’s Republic of China and its journey covering the recent challenges such as the crisis of climate change covid pandemic and terrorism. Adding that despite all of these challenges how China’s future is brighter than ever, beckoning towards president Xi Jinping’s cooperation with African nations and cultivation of Chinese wisdom through the GDI, or the global development index, which sparked energy in a world of vitality, and was widely well received by all African nations.

This initiative to “steer global development toward a new stage of balanced, coordinated and inclusive growth”. With special consideration being given to “poverty alleviation, food security, Covid-19 and vaccines, financing for development, climate change and green development, industrialisation, digital economy, and connectivity” talks to the nature of the wide scale positive reception to GDI from new emerging and fast developing countries, Somalia being one of them

The ambassador, also briefly, mentioned the success of the winter Olympic Games hosted in China and how it symbolises, the adaptability of the Chinese system, that despite the Covid restrictions – the games running smoothly and participants from all over the world coming together for a great sporting event.

A powerful theme which the ambassador introduced to everyone and was recurring throughout the online reception was space exploration, Chinese experts and scientists developing cargo and manned spacecraft to cover new ground in the boundless cosmos, and with it pushing humanity forward.

The taikonauts — Chen Dong, Liu Yang and Cai Xuzhe, who are on a six-month stay in orbit, shared with the African youth their life and scientific work in the space station.

Three Chinese taikonauts, talked from space with the youth from eight African countries on Tuesday via video link, including a nine-year-old Somali girl in which they shared their experience in the Shenzhou-14 mission.

The main venue of the event, titled “Talk with Taikonauts,” was held at the headquarters of the African Union in Addis Ababa, while students from Algeria, Egypt, Ethiopia, Namibia, Nigeria, Senegal, Somalia and South Africa joined the dialogue at sub-venues.

This historic Somali to space contact credited to the initiative that sparked this brilliant and admirable task has been coined by the China National Space Administration (CSNA) under the framework of China-Africa traditional friendship and space cooperation, aiming to build a space science exchange platform for Chinese and African middle school students to explore a new mode of space science popularization cooperation. Which not only marks cultural exchange between the youth and taikonauts but also a scientific and technological one and prehaps the most impressive feat reached between China and Africa.

The 20th Communist Party Congress, in China is set to highlight the inevitability of the historic rejuvenation. This decades-long era of growth and development has marked prosperity a new openings for friendly African nations as it was strictly noted by Ambassador Fei as modernisation through mutual coexistence and benefit, not colonialism. The online event also showed Incredible contributions from the school of African Studies highlighting  how the Somali language is now being taught for the first time in Beijing Foreign University displaying he adaptability and the determination of Somali students in China who were engaged in a range of programmes, courses and scholarships and were determined in utilising everything they were learning to take part in the process of reconstruction and development back home. Indeed some of the current nurses and doctors working in Benadir Hospital were alumni of these aforementioned programs.

There was a display of many of the Chinese developments in the African continent, worldwide projects and the amazing progress by the enormous Belt and Road Initiative (BRI). The magnificent culture, heritage and monuments in China. The different landscapes and environment conservation efforts.

Also explored was the life of everyday Somalis in China; students,businesspeople and even the unique lifestyle of a Somali Chinese family! From the clips,many Somalis seemed to have flawlessly learnt to speak Mandarin, the most widely spoken language on earth!

To top it all off,there was a China-Somalia friendship photo contest in which top winners were awarded.

This exchange off goods and human resources always leads towards trade growth with historic Somalia, a Somalia for whom China has full respect for its sovereignty and territorial integrity, something which both nations abide by.

Ambassador Fei also wrote an in depth piece of article laying therein the inviolability of the territorial integrities of both nations.

You can read the ambassador’s article here https://www.dailyjubba.com/2022/08/09/one-china-principle-and-taiwans-return-to-the-motherland-will-not-change/

Ambassador Fei Shengchao also highlighted the People’s Republic of Chinas donation of crucial humanitarian aid and covid sinopharm vaccines to Somalia, at the start of the pandemic highlighting the historic relationship between the two nations. (Note: this was at a time when some western countries were not willing to share their vaccines to African nations)

The ambassador noted back then that: “The pandemic has taken its toll on humanitarian support worldwide for these supplies, the cost of production has gone up 15% and the cost of shipments has soured seven times”.

Despite the drastic increase in the production and shipment costs as well global instability, China had stuck to its promise and has proven yet again its commitment to humanitarian values and internationalism as it continued on the delivery.

The symbolic perseverance of both nations, amid the pandemic, was highlighted by the ambassador adding that China and Somalia are well-known for their tough times faced, compassion for each other and for their unique resilience.

The Peoples Republic of China, held the United Nations Security Council presidency for the month of August 2022 and through its Ambassador, Zhang Jun called for the lifting of the 1992 UN arms embargo on Somalia so that it can equip its army to fight against terrorists.

Chinese Ambassador to Somalia Ambassador Fei Shengchao gave this quote to the Daily Jubba at the time regarding China’s stance at the UNSC saying;

“China and Somalia and other African countries need to work together to push for peacekeeping reforms and lifting embargoes. It’s not going to be quick and easy, but it’s worth all the efforts. The more united we are, the more likely changes may happen and happen sooner.”

China calls for an end of the UN arms embargo imposed on Somalia since 1992.

China is a permanent member of the security council with veto power. Its Ambassador to the UN Zhang, called for peacekeeping reforms and ending arms embargo on Somalia. @FeiShengchao @ChineseSomalia pic.twitter.com/mKdC8bvP9n

This was a change of policy as China abstained on the matter last year as the United Nations Security Council voted to extend the 1992 arms embargo on Somalia.

2022 marks a year of significant Chinese upgrading of its relations with the horn of Africa,a strategic part of the continent and global affairs. This was manifested in China’s increased deepening of ties and relations in the region first by the visit of Foreign Minister & State Councillor Wang Yi, followed by the subsequent appointment of the Chinese Special Envoy for the Horn of Africa, Xue Bing who visited Somalia meeting the president,prime minister and foreign minister of Somalia.

It is definitely interesting to look for the ever growing China-Somalia relations as well as the wider China-Africa relations.

The Women’s Rights Movement in Somalia