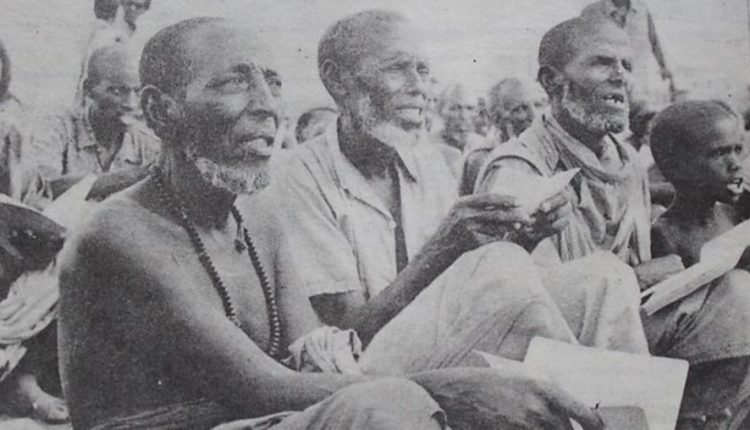 The revolutionary socialist government of the Somali Democratic Republic took power on October 21st, 1969 and launched a variety of campaigns to improve the socioeconomic standing of the country — chief among them were the mass literacy campaigns of 1973-1975.

Literacy was a primary preoccupation for a multitude of reasons. The Somali language, despite its long oral tradition and status as the mother tongue of 95% of Somalia’s population, was without orthography until 1972. Further complicating matters was the smattering of different written languages that played important roles in the country: Arabic had been used for centuries in religious and cultural affairs, and during the colonial period (that only ended in 1960), the medium of instruction and administration was English in British Somaliland to the north and Italian in Italian Somaliland to the south. Most pressing of all was that the literacy rate was around 5-10%.

This low literacy rate due to the lack of use of the Somali language generated social stratification — the minority of Somalis who were the beneficiaries of foreign language-based education like English or Italian, clustered in urban centres, crafted a new elite. The overwhelming majority of Somalis who did not fall into this category were obscured both from meaningful participation in national political dialogue and were disadvantaged in daily transactions, such as when applying for jobs or filling out school registration forms for their children.

In the world, our language was taking no part; but the sunrise appeared uncovering our language from darkness; the fence was cleared, so the livestock could graze. Give me your pen, the words I wrote from you. It is not a foreign language; the tongue does not slip. Like milk, it can be swallowed smoothly.

In October 1972, a Somali script using the Latin alphabet was adopted, and in 1973, the Supreme Revolutionary Council (SRC) declared Somali the official language of administration and education. Following these significant developments, on March 8th, 1973, the political decision to launch two national literacy campaigns, one urban (1973/1974) and the other rural (1974/1975), was made. A major goal of the education portion of the Five Year Development Programme, 1974-1978 was to bring literacy to nearly 90% of adults. Alongside the nationalization of all private schools, this campaign would work to mitigate the legacy of elitist colonial education policies, integrate the people into one nation, and implement political awareness, among other objectives.

The campaigns were intentionally scaffolded so that the urban phase prepared the way for the rural tract; it was the graduates of the first campaign who contributed to the second by becoming the teachers in the rural development campaign. A key factor informing this decision was that a significant number of urban residents were already literate in English, Italian, or Arabic and could more easily transition to picking up the Somali script.

The urban venture in major cities and towns focused on government workers, teachers, and school children and ensured that they learned to read and write in the new Somali script. For government officials, in order to keep their positions in the public service, they had to pass the literacy examinations they were given after three months of study. In total, the urban literacy campaign of 1973 brought basic literacy to approximately 500,000 citizens.

During the 1974-1975 year, all state schools were closed as the populace mobilized for the rural development campaign. Teachers were put to work training student-instructors and preparing the requisite Somali-language teaching material. All secondary students, some as young as fourteen, were sent to rural communities to teach literacy. As indicated in a lecture by the then-Director General of the Ministry of Education, the aim was of this project was two-fold, “the alphabetization of the rural masses as one of the prerequisites for development … [and] the teaching of our revolutionary principles, i.e., the teaching of socialism, and through self-help (iskaa wax u qabsó), the rural masses will be brought to the same level of political consciousness as the population in urban centres.”

Altogether, 1.7 million people, including 600,000 women, participated in Somalia’s urban and rural literacy campaigns, bringing the national literacy rate to 70%. In recognition of this tremendous accomplishment, Somalia was awarded a UNESCO prize in 1975.

In 1969, when Siyaad Barre’s government was forming, only 227 primary schools existed in Somalia, with 37,971 students and 1135 teachers. In just seven years, education was radically stimulated by the development of a written Somali script, the institutionalization of compulsory basic education, and the mass literacy campaign; leading to 1002 primary schools with 229,030 students, and a teaching force comprising 6540 teachers. As well, the percentage of female teachers rose from 10% to 30%.

There is much that can be learnt from the objectives, outcomes, and experiences of participants in this revolutionary project; the answers to current crises in education, literacy, and development in Somalia may in fact lie in such an interrogation.